About 90 minutes in a car from Camps Bay, and half an hour from Stellenbosch, sits Franschhoek Valley.

If you think of wine from South Africa most people will think of Stellenbosch, which is why we went to Franschhoek.

Nestled between towering mountains, the town is a “must visit” on all food and wine lovers’ lists. In fact, since its popularity has increased since the 90s, many now describe Franschhoek as the “food and wine capital of South Africa” and many of South Africa’s top rated restaurants sit within its borders.

We stayed at Leeu House, which is part of the Leeu Estate and offers several accommodation options including the Manor House, but Leeu House is more central and meant we could walk everywhere.

Another small and perfectly formed boutique hotel, our deluxe room overlooked the mountains and had the usual wonderful bathroom (I did finally have a bath here!). While it was the most formal place we stayed on our trip, with its own restaurant and a beautiful lounge with a log fire and an honesty bar, it was like a home from home. If we’d had more time I would have spent a few hours exploring their amazing library in front of that fire. 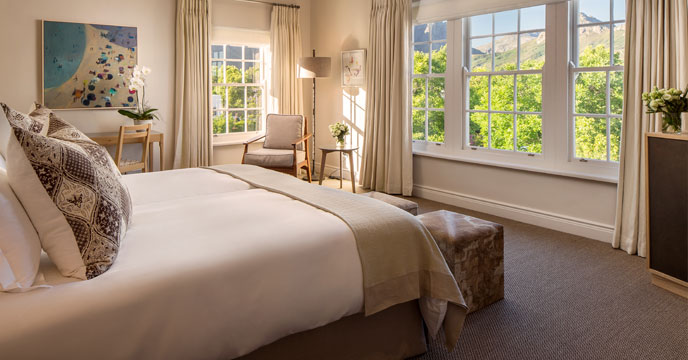 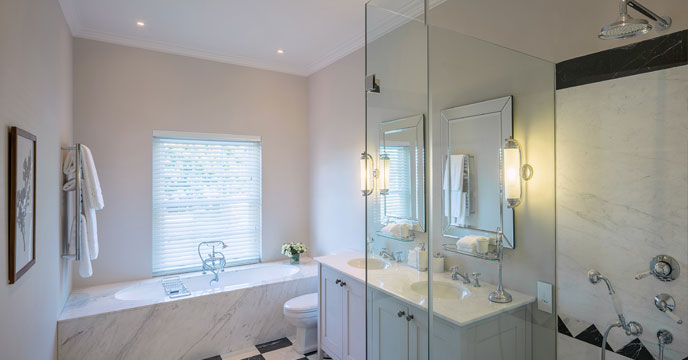 The original valley was settled in by the French Huguenots refugees in 1688, when many were given land by the Dutch Government – the valley was called “Olifantshoek” (Elephants Corner) at the time; it later became “le Coin Français” (the French Corner) and then finally Franschhoek which is Dutch for French Corner.

The French and Dutch influence is still very obvious today; many of the settlers named their new farms after the areas in France from which they came. La Motte, Champagne, La Cotte, Cabrière, La Provence, Bourgogne, La Terra de Luc and La Dauphine were among some of the first established farms — most of which still retain their original Cape Dutch farm houses today. These farms have grown into renowned wineries.

We took our first afternoon in Franschhoek to chill out, firstly in Tuk Tuk, Leeu House’s very own microbrewery, and then for an hour by the pool. The staff probably thought we were crazy British people as it was quite cool at that point but we had jumpers on!

Tuk Tuk is a new venture in conjunction with the Cape Brewing Company (CBC) and it is well worth the visit. MrS assures me the beer was excellent (you can have a beer tasting menu of 4 or 8 beers) and the food was also very good. I also discovered an amazing tonic here but as with the wine, they keep the best tonic in South Africa also, and it’s not available to buy in the UK.

That night we ate at Leeu Estate’s newest food venture, Marigold, the first classic Indian cuisine restaurant in Franschhoek. It’s clearly very popular and there’s every reason why; the food was amazing, and the service impeccable. You shouldn’t go there expecting a chicken korma and pilau rice, it’s much more sophisticated than that, with dishes like Aloo Tikki Chole Chaat (New Delhi street food) and Machli Amritsari (deep fried fish goujons, the batter made from gram flour). It was so good I didn’t get any photos (actually that’s because it was too dark) but we did wash it down with a good Gewurztraminer.

Day 1 in Franschhoek, 2 out of 2 excellent eating venues and both within a 2 minute walk of our hotel.

The next day we went on the other tour I had pre-booked while we were still the UK.

There used to be a railway which ran between Paarl and Franschhoek, but as road use increased people stopped using the train and it fell into disuse and disrepair. Until that is, someone had the ingenious idea of reinstating it as the Franschhoek Wine Tram, which now transports visitors between the wine estates in the area.

There are several routes and you can hop on and hop off to your heart’s (or legs probably, by the end of the day) content and the vineyards you chose to visit for tasting.

Because we didn’t really know much about the vineyards, we decided to let the tram take the strain a little more and opted for a curated experience. MrS was very excited about the tram.

With the curated experience, you have a guide specifically with you all day, a tour of one of the vineyards with a lecture on wine tasting and three tastings at three different estates – all with lunch included. Our party of 6 consisted of 2 younger couples (one Canadian and one Welsh) and us, which may have had the potential to be awkward but really wasn’t. We had a ball, even if we decided not to actually go to the trouble of importing wine through Germany to get it home.

We had our lecture, first tasting and lunch at the brilliantly named Rickety Bridge Estate. In the afternoon we moved on to Grande Provence, who also had an amazing art gallery, and finally at La Brie, we all tasted the same 3 wines, but paired with either chocolate, biltong or Turkish delight so we got an understanding of how wine tastes with different foods. It was a really fun day.

That night we ate at The Dining Room, the restaurant in the manor house (a car will take you between the two houses). I’m running out or superlatives for the food we ate on our holiday, the Dining Room lived up to its reputation and its reviews. The only off note was that we weren’t offered an aperitif whilst we looked at the menu, but I think I’m just looking for things that show I’m not just saying everything was wonderful now!

It’s here that I must own up to the fact that I don’t read menus properly past the first line. So whilst I usually know what meat or fish I’m getting it’s sometimes a surprise how it’s cooked. Following some incredible amuse bouche, we ordered tempura prawns as a starter (it’s ok, I know what they were going to be like) but I thought I was ordering lightly when I ordered Korean chicken with cabbage salad. My mind completely blanked the “fried” part! So much for my light meal. However, it was all delicious, and we both found enough space for a dessert (me) or pudding (him), (this is a discussion we have now at each meal). I mean, just look at it, how could you not find room for dessert/pudding?

On our final full day in Franschhoek the weather took a turn for the worse, and whilst not raining all day it was overcast and cold.

We visited the Huguenot Memorial in the morning, the clouds giving us some wonderful photographic opportunities, and we took a wander around the town, looking in the plentiful galleries (expensive), checking out the property prices (not expensive) and purchasing some local gin to take home. By lunch time we had retreated to Tuk Tuk again. Sadly, Friday must be coach tour day as it was really busy and the service struggled as a result, but we spent a couple of happy hours people watching (and drinking and eating of course)

Our final night called for a special last supper. I’d really wanted to eat in the Michelin star winning Le Quartier Français, and as soon as the hotel was booked I asked our agent to reserve us a table but, quelle horreur, it closed down in July as the Head Chef wanted to take a new direction.

There really are so many places to eat in Franschhoek so I did some more research and found out about Foliage. I was intrigued by their website and the reviews I read were very good. At this point we were feeling like all we’d done was eat and drink for 2 weeks solid and that there was nothing left to surprise us (and wondered if there was any space left in us to even try and be surprised).

Foliage did just that though. The menu is unusual and I wish I’d taken a photograph of it because there is no menu shown on their website as it changes so often.  To begin with MrS had a savoury smoked cheesecake with tomato vinaigrette, sunflower and garden shoot salad and I had yellowfin tuna tartare with wood sorrel, mango atjar and a horseradish egg (told you it was interesting). For main course MrS had Hot-smoked chilli, tomato and barley risotto with cashew “butter”, caponata and dandelion pesto and I had BBQ and whey-braised angus beef brisket, burnt pears, potato nest, porcini mousse, ferns, forest herbs and onion panzanella. Still with me?

This could have felt pretentious, but it didn’t. You wouldn’t dream of putting half these things together but they all worked. I think if I’d seen the menu in advance I may have considered it too fussy and chosen to eat somewhere else but I’m so glad we didn’t. It was an incredible meal and I won’t forget it.

I loved Cape Town, but I fell in love with Franschhoek. I know every year people go on holiday and come back dreaming of living where they've just returned from, but I definitely left a piece of my heart in Franschhoek.

We travelled with Abercrombie and Kent who put together this bespoke package for us.

This post originally appeared on Life and Love in London

Life in the time of Corona